In December 1995, my movie-world was rocked to its foundations with the release of Heat, Michael Mann’s L.A.-based crime masterpiece. I had never seen or heard anything like it. The action sequences were thoughtful, gritty, and cacophonous. The story, while not overly complicated, was compelling. I staggered out of the theater (Saskatoon’s now defunct Capitol Four) disoriented and punch-drunk. Heat was immediately one of my favorite films. 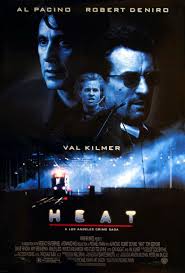 Prior to the film’s release, it was surmised that the onscreen meeting of Al Pacino and Robert DeNiro would create a rift in the space-time continuum. (Of course, they had both starred in the Godfather II, but had not shared the screen.)

Michael Mann, fresh off The Last of the Mohicans, chanced a rupture in space and time, and it was clearly worth the risk. He cast Pacino as Lt. Vincent Hanna and DeNiro as Neil McCauley. Both characters were driven, adrenaline-fuelled, Alphas: McCauley the cool career criminal with a code, and Hanna as the unrelenting, hyper-passionate lawman.

Over the course of 170 mins, they play a deadly game of cat-and-mouse throughout the streets of Los Angeles. Hanna seeks out McCauley with singular determination, while McCauley pursues his final big “score.” At one stage, they sit down for a cup of coffee and discuss their situation. This scene, of course, was highly anticipated and, according to Mann, unrehearsed to maintain authenticity.

According to Matt Patches in Esquire, as Hanna and McCauley ruminate on the duality of human instincts the scene is “biblically awesome.” I certainly agree, but it isn’t the best part of the film.

Instead, the heists – that is, the action sequences – remain the most memorable and explosive scenes in the film. The realism of the high-octane robberies left me breathless. As Mann explained it, the shootout scenes were done “using the natural sound of the gunfire recorded on set. And with no visual effects.” According to Vince Mancini, “the action scenes have a way of drowning out the rest in retrospect because they brought an intensity…that I don’t think we’d ever seen up until that point.” Here’s a YouTube link to the armored car robbery. 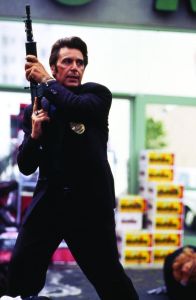 But what about drugs, you may ask? Right, I nearly forgot.

Al Pacino’s frenetically intense Lt. Hanna is constantly on the edge. He’s thoroughly hardcore in his pursuit of McCauley and he’s always keeping it 100. The original script of the film showcased his addiction to cocaine, a “tool” he used to stay sharp, stay focused. However, the final version – much like Robert Downey Jr.’s Sherlock Holmes – chose not to go down that cocaine road and underline mis/use of the drug.

At the end of 2015, we’re caught in the midst of Star Wars mania. We’re trapped in its unyielding gravitational pull. Yet, twenty years ago this month Heat proved itself a groundbreaking crime drama. In a recent Q&A during the Toronto International Film Festival, Mann answered a question about the line in the film, “time is luck.” He asserted to audience members that he truly believed it —  that “Time is luck and that’s why I keep repeating it in all these movies.” If we’re lucky, we’ll be talking about Heat in another twenty years.